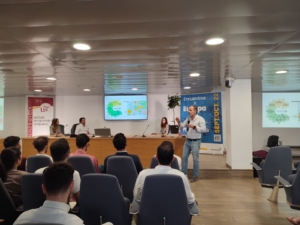 Canal Europa and its event “Encuentros por Europa” organized an event in Sevilla (Spain), where one of the WatchPlant project partner IRNAS-CSIC showed it.

Antonio Díaz, researcher in IRNAS-CSIC spoke about the Ecological Transition. The event took place at Faculty of Economic and Business Sciences of the University of Sevilla, with a majority audience of university students. Current issues on the energy crisis and the transition towards a more sustainable production and use of energy were discussed.

The WatchPlant project was explained as an example of a practical case of this ecological transition. Although the objective of the project is not to produce energy to replace conventional energy sources, it stands out for investigating the use of new energy sources from plants that allow the feeding of sensors with the aim of perceiving the environment.

The audience was very interested in the mechanisms that plants can employ to interact with the environment, and how the Project is going to translate the language of plants from the sensors signals. The implications of using plants both as pollution “guard” in cities, as well as to manage increasingly scarce water resources in future precision agriculture were explained too.